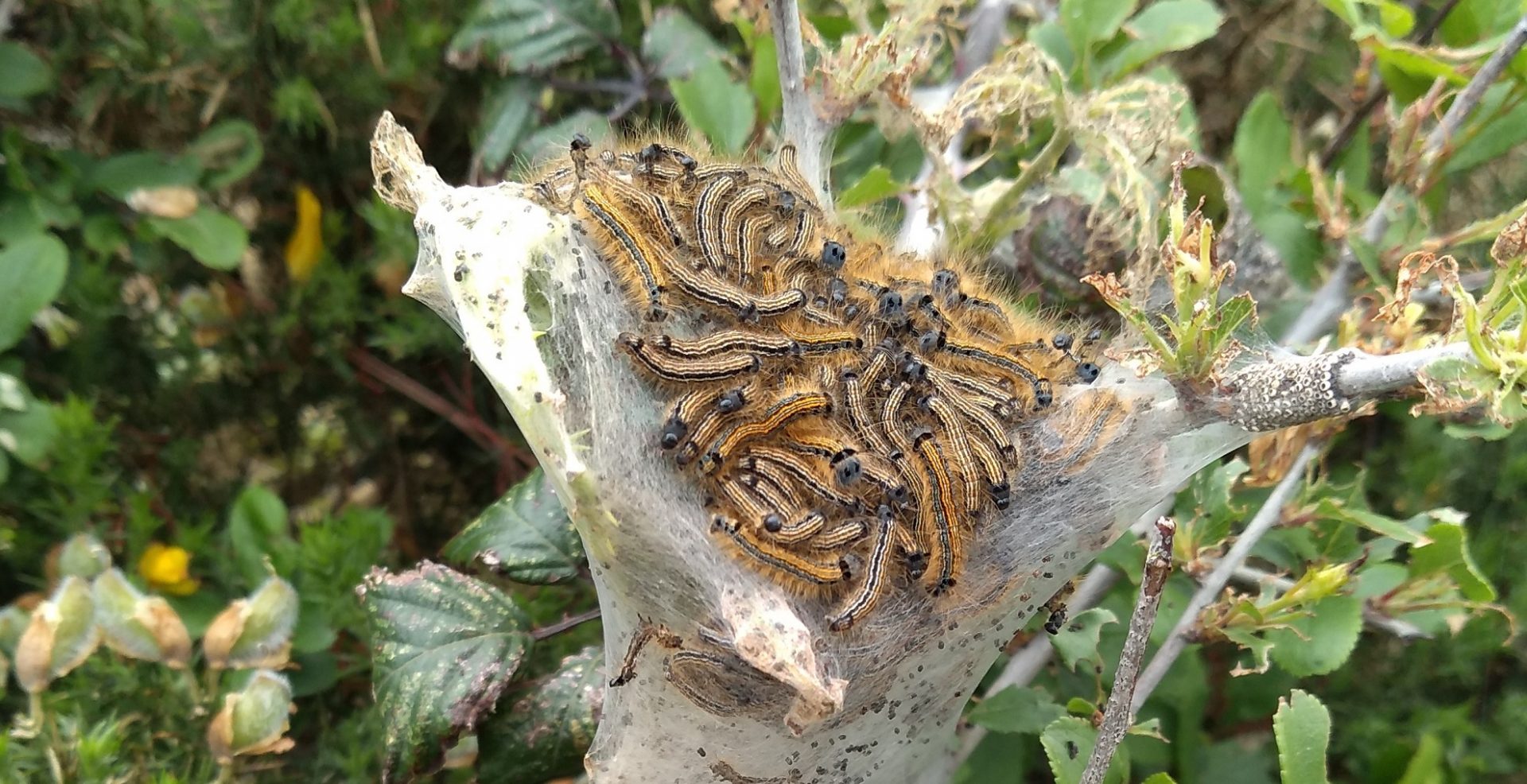 Have you spotted dense webs on hedges and wondered what’s lurking inside? Ever wondered what spider was behind them as they don’t look like a typical spider’s web. Possibly you’ve seen the webs with caterpillars wriggling in them? Well these grubs are not an eight-legged creature’s lunch and that web was spun by those caterpillars.

We spotted these webs, belonging to the Lackey Moth caterpillar, along the coast path near Westward Ho! in north Devon.  Here’s a brief introduction about these creatures, their weird webs, and crazy grown ups!

The Lackey Moth is common in the southern England, especially near the coast. Frequently found on blackthorn and hawthorn hedges, they can be seen sitting in their web if they have been left undisturbed, like the ones we photographed near Westward Ho!.

The Lackey Moth lays eggs in neat rows on the stems of suitable shrubs in late summer, you can see these on the right hand branch in the photos above.

Caterpillars hatch around April time and have distinctive blue and orange stripes with long brown hairs. They feed heartily throughout May & June, spinning a silk web as they grow. Their hairs protect against predators and they retreat into their web when in danger.

Lackey Moth caterpillars in their web

In June they pupate near the ground and the adult moths hatch in July. The adults are 2-3cm wide and are not as attractive as the caterpillars, being beige to brown in colour, with a furry body and large feathery antennae. To see the adult moths click here.

The adults are strongly attracted to light and often fly indoors at night straight into a lightbulb, then zoom around and crash into everything uncontrollably!

Other silk spinning caterpillars include the Brown Tail Moths & Ermine Moths. The web we found on our coast walk is very modest, there are plenty of reports of enormous webs created by the silk-spinning caterpillars, such as this entire tree covered in Yorkshire.

So if you come across these amazing structures, take a closer look, but we can’t guarantee there’ll be no horrid spider waiting to pounce.

View all posts by Ruth