Read on to find out how you can make this Spooky Glowing Fluorescent Slime using a yellow highlighter pen!
We made amazing spooky glowing fluorescent slime in time for Hallowe’en and we want you to be able to make it too. Read how easily we did it and watch the video too….. 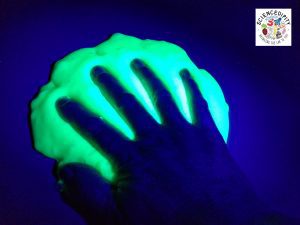 If you have never made slime before read this:

To make spooky glowing slime you need to know the basics of slime making, read this blog to help you get started with slime making.

If you have made slime before read this:

OK, so now you can confidently make slime you must have a go at this Spooky Slime.
To make our slime glow under a UV torch, we added fluorescein to the slime mixture.

You need to extract fluorescein first, here’s how we did it…

First I protected the work surfaces and put on gloves & goggles as this part was messy! Using pliers I broke open the highlighter pen, removed the cartridge and popped it into the glass with about 50ml of water and squeezed out the highlight pen ink into the water.

You can actually have some UV science fun with the fluorescein liquid on its own, read how much fun we had with fluorescein here.

Watch the video on how to make Spooky Halloween Slime here and/or read more below:

To make the slime we added the yellow liquid containing fluorescein from our highlighter pen to our glue/water slime base (before activating) and mixed it in really well. We then activated the slime with our Borax solution, you can use your regular activator – it should still work. We tried adding other colours to the slime but this just hid the fluorescent effect, so I’d recommend using no other colouring or glitter etc, just the basic white PVA glue, water, the fluorescein liquid and borax solution. To get the best effect of glowing slime, the room needs to be VERY dark and we used inexpensive UV torches (£4 each), which did the job brilliantly.

Check out our other How To blogs here:
Colour-changing thermochromic slime
Magnetic slime
Fluffy slime

Good luck and have a happy sliming.

If you tackle this activity at home you do so at your own risk. If you have as much fun as we did, feel free to share your pictures with us on Facebook.
Bye for now
Ruth